Demo of Using The Zorn Pallet

There has been a lot of debate as to which Black Zorn used but it is believed to be Ivory Black, which is the colour I used for the painting ‘Zorn Palette demo’. Ivory Black works well as a blue but possibly even better is Winsor & Newton’s Blue Black. Blue Black is a colour I recently discovered and use a lot in my sky paintings now.
It is possible that the red may have been Vermillion; you could try this as an alternative. The white I used was Titanium white but back in Anders Zorn’s time it is more than likely to have been Lead White.
It might at first strike you as an odd selection but the main three colours are just the earthy equivalents of the three primary colours Black being the blue.

I was working from a photograph that I took in Dedham last year. Having drawn the sketch I decided that it would be a better composition if it were cropped to a square.


First sketch in the main lines with black and red diluted with turps. 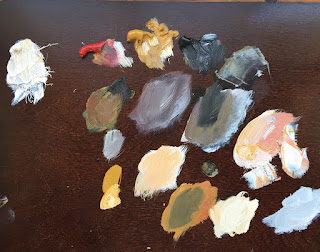 Make sure your brush is clean when you mix the light colour near the horizon with white, yellow and a touch of red. The colour here needs to be fresh.
The distant trees are a mix of white, black and yellow; they need to be dark enough to register against the sky but not too dark that they jump forward. In front of these the distant fields are white with a small amount of yellow.
It is very important to make sure there is no trace of white in your brush when you mix the colour for the dark trees. Even a trace left in the brush will make your colour ‘milky’. Painting in the reflections at the same time. The water should reflect the sky colours; paint this around your reflections. The meadow area is yellow with varying amounts of black and, in some places, red added.
Posted by Mo Teeuw at 01:35 1 comment:

Last night I headed over Peterborough way to Castor art group. I have been a couple of times in the past so there were a lot of familiar faces to greet me. They are a great group to demonstrate to as there is lots of feedback, questions and  - the obligatory banter.
I decided to replicate a painting I did during my 30 days of painting in January. The original of this was 10" x 10" so 14 x 18 was a bit of a challenge, for a start the proportions had changed completely.
Even for an experienced painter it can be a bit nerve racking painting such a big picture in front of a crowd - you just never know if it will work. Of course there are probably demonstrators that paint the same thing all the time but to be honest - I couldn't do that. In my mind all freshness would be lost and it would be boring.
As luck would happen - this one worked, I was quite pleased with the reaction when I popped the painting in the frame at the end.
Posted by Mo Teeuw at 00:36 2 comments: